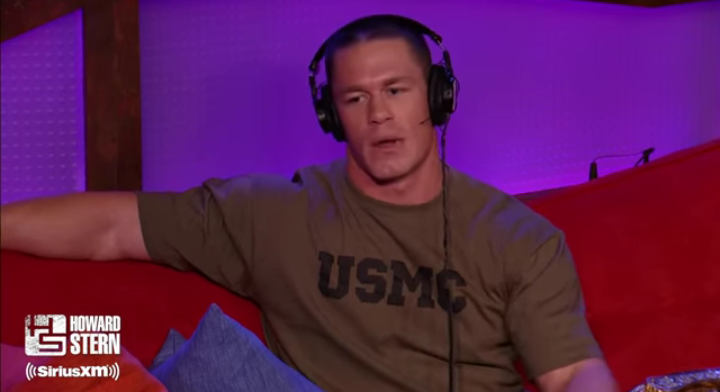 This blog is about psychic attacks that I received from John Cena. If most of you don’t know who John Cena is he is an american professional wrestler, actor and he has been a television presenter. He’s wrestled for WWE part-time and is the current host of Are You Smarter Than a Fifth Grader? On Nickelodeon.

I sat at a table with John Cena and the married couple on John’s lap. I said “Hi, John how are you? and I started up a conversation with him. As the time went by John asked me a very personal question before he left.

I was very surprised when he made advances towards me like this. I just met him and he already wanted to put his dick in me. I had just got married and I told John “I’m so sorry, but I won’t be having sex with you tonight because I just got married.”

Here’s a Blog that I wrote about the Psychic Attacks I received from my ex-husband who was trying to get a green card off me in Memphis Tennessee. I refused to have sex with John Cena because I recently married my ex-husband who was just using me to get a green card. Here is a blog I wrote about Psychic Attacks with my ex husband & Chris Cuomo. Please check it out want you? Thanks! 👇 https://psychicmediumjanepaixao.com/2020/07/11/psychic-attacks-with-my-ex-husband-and-chris-cuomo/

The look on John’s face was not a nice look. He actually was very upset with my response towards him and his advances towards me. I got up from the table and went to the bathroom and came back to his table after giving him my response. I sat back down on his lap and he told me with a smart ass grin on his face.

No problem. “I just had a really great conversation with the married couple here at the table with us” and “I said oh that’s great.” Then John Cena said “I’m going to be moving along now. It was nice meeting you Jane.” After that he left the table and went to the bathroom himself.

After he left the table the married man leaned over to me and with a big grin on his face told me do you have any idea what’s going to happen when me and my wife leave here together? I looked at him confused and said no I don’t understand what you’re talking about. The married man looks so happy and said I’m going to watch John Cena fuck my wife 😃.

I was very taken back when he told me this. So John Cena wasn’t trying to really get to know me he just wanted to use me as a quick FUCK for his penis. He came into the strip club looking for sex and he thought I guess he thought I was an easy target. I would not know. I guess I should be honored that a celebrity would be attracted to me, but he just made me feel like a piece of meat.

As well John Cena came out with a new movie in 2006 called The Marine right after my mother passed away from a heart attack.

One of the individuals she was involved with in the embezzlement of my trust was helping her use another person’s social security number to open up a fraudulent bank account and then she embezzle bonds that I had in my trust with a Marine and his wife who is Chinese. I’m not saying that this has anything to do with John Cena’s new movie but how ironic is that?

As time went by I wrote a fan letter to John Cena. I reminded him in the letter where I originally met him. I asked him in a letter if he would help me start a court case with money that I need to start the court case. I explained in the letter that I had over four million dollars in my assets embezzled from my trust fund and I really needed money badly for an attorney to file an embezzlement recovery case.

So essentially I was writing John a letter asking for his help and if he could please loan me money so I could hire an attorney to start a case for a breach of fiduciary of my trust I had at Melton law firm in Greenwood Mississippi. Floyd Melton Jr helped my mother embezzle from my trust. My mother started embezzling from my trust in 2001. So a lot has accumulated over the past 20 years since the embezzlement has started.

I also told John in the fan letter I sent him that I’m publishing my father’s biography because his life was slandered and fabricated and I wanted people to know the real truth about what happened in his life and how he was really murdered. My dad’s good friend William Eggleston slandered my father’s life and unsolved murder for money. So I asked John if he would please help me with money so I could start my court case to stop a man from fabricating my father’s life for money.

John Cena responded to my letter by pulling my energy out of my body. I was not as lucky as some of his other fans. He received my fan letter February this year. At times when he would pull my energy out of my body because of the energy exchange I would remote view him and I would also remote view his boss Vince McMahon because of the energy exchange and President Donald Trump and his kids.

I also remote viewed John having sex with his Irani girlfriend on one occasion. They were making love standing up. John was getting her from behind while they were standing up.

So if I ask John Cena for help and I’m trying to put organized criminals in prison and have them indicted that are very good friends with the President Trump. Do you think John Cena’s going to help me. He didn’t help me. Instead he targeted my energy body. Not only did he Target my energy body. I also astral projected to John’s ex girlfriend’s house Nikki Bella and witnessed a very shocking scene playing out between John Cena and his ex Nikki Bella and another woman in March 2020.

It was 5:00 a.m. in the morning and I am assuming Artim was not home with Nikki because I did not see Artem at the time hanging out with the three. Around this time I astral projected to John Cena and where he was located at the time. It was right before Nikki & Brie Bella released their new book “Incomparable”.

I’m assuming the reason John was around Nikki at that time was because he was editing her book about stuff she said about her relationship with John when they were together. I astral projected to Nikki Bella’s house and witnessed John sitting on her couch watching Nikki completely naked with her butt up in the air and another woman pointing her finger at her vagina that was raised up in the air from behind.

I did not see Artem, Nikki’s husband anywhere around. I was in shock and in disbelief when I saw what I saw. I remember the colors of her wall and what was going on and I could even smell her vagina. It didn’t smell that hot to me actually and I was very repulsed by what I was witnessing.

I don’t know any of these people and I’m thrown all up into the mix as if like fuck me! They don’t give a shit about me! I felt like I was being treated like shit. John Cena’s not going to help me because his Ass is owned by Vince McMahon and he’s friends with President Donald Trump. President Donald Trump’s who has been trying to kill me with Psychic Attacks. So do you really think that John would have helped me? No he wouldn’t and his actions towards me spoke loudly.

John Cena has to portray a certain image. He likes to portray the hero part for his fans. You see this in this YouTube video 👇 https://youtu.be/0f1szretn8E

Can you see this Hero image he tries to portray? I can. He wants to be that positive role model for people and he wants people to always remember Never Give up!

Don’t worry John I’ll never give up regardless if you and your friends Target me with psychic attacks. I will not give up because I found my money that was embezzled from my trust fund and I’m not going to let a law firm use my mother’s name with identity theft anymore regardless if the White Collar Attorneys are friends President Donald Trump.

I hope you all enjoyed reading my blog about psychic attacks I’ve been receiving from John Cena. Please don’t be a victim of psychic attacks. Learn to protect your energy feel from people who want to Target you for their benefit.